We are delighted that Sing a Rainbow won the ‘Follow Us On Twitter @starsports_bet Handicap’ at Brighton under leading apprentice Jason Watson. Sing a Rainbow made headway to close in on the leaders over two furlongs out and was ridden into second over a furlong out, she stayed on inside the final furlong to lead in the final 100 yards and won well. We are thrilled for owner Benny Andersson who bred Sing a Rainbow, she is the first foal out of Beatrice Aurore who won four times for Benny and by the prolific sire Frankel. Well done to Barry Smith who rides Sing a Rainbow at home and his wife Charlene who led up. 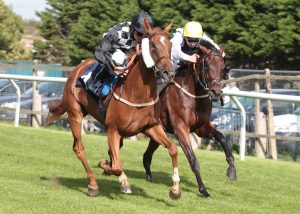