We were thrilled to have a double yesterday at Doncaster and Newbury!

Inhale won the British EBF Premier Fillies’ Handicap over seven furlongs under Graham Lee at Doncaster. Inhale was tucked in behind the other three runners before making headway over a furlong out and led inside the final furlong to win well. We are delighted for owner breeder Prince Khalid Abdullah and well done to Nigel Dungar and Chris Waterlow who made the trip to Doncaster with Inhale.

The second winner came in the last race of the day at Newbury when Lightening Dance won the AJC Premier Fillies’ Handicap for owner Mrs Alexandra Chandris. Ridden by Jim Crowley, Lightening Dance was held up in midfield before chasing leaders over two furlongs out and pushed into the lead over one furlong out. She stayed on well inside the final furlong and won comfortably. Well done to Martina Polzerova who looks after her at home.

We were also pleased to see Danielle Smith finish 3rd on Banksy’s Art in the first division of the amateur race at Newbury and Guy Mitchell having his first ride got round safely when riding Double Legend in the second division of the race.

Congratulations to all connections and thank you to the team at home. 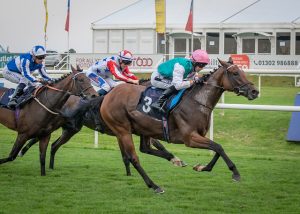